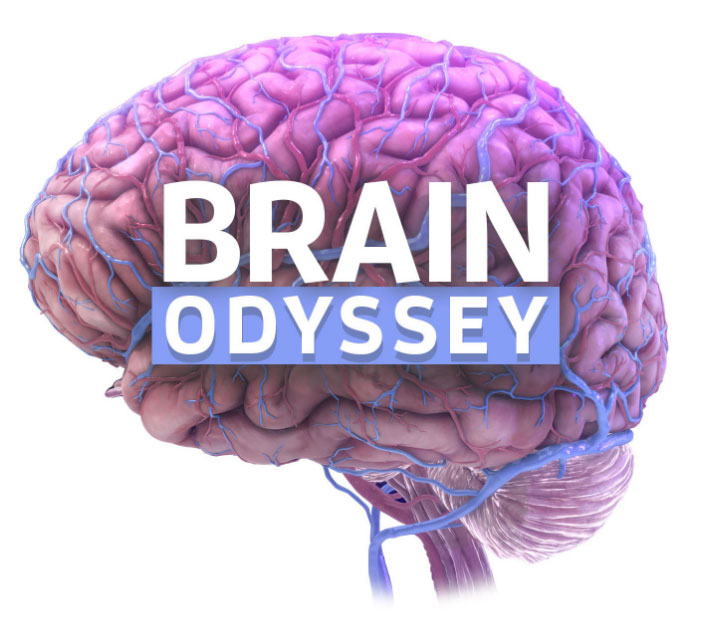 INTERVOKE would like to share with you a new and exciting exhibit we are launching called "Brain Odyssey". This is a unique large-scale immersive interactive exhibit highlighting a dive into the 6 layers of the brain including a cool looping attraction screen that acts as a screensaver.

The Brain Odyssey exhibit, puts visitors in command of an awe-inspiring journey into the brain's inner structures. This starts outside the brain then dives into more and more intricate structures, finally reaching a microscopic level of neurotransmitters, those complex chemicals that form the foundation of all neural communication.

This is a multifaceted installation designed to put the marvels and mysteries of the brain at visitors' fingertips. Originally opened at the South Florida Science Center and Aquarium and developed with large scale display screens by IDEUM. Our Software Engineering and Creative Services team spent more than a year designing and developing the exhibit’s most immersive and technically sophisticated experiences. The exhibit's size and detail make it possible for large groups to view the projected imagery together, and the integrated high-fidelity audio system pulls users across the gallery into the inner-space journey.

The voyage plays out on a massive curved wall at one end of the exhibition. A bright, high-resolution Barco 4K UHD projector casts dynamic 3D images of the brain—its lobes and fissures, inner structures and systems, individual neurons and synapses—onto the 14-foot wall. Guests control their journey at a custom console containing a 43" IDEUM Inline display and a joystick with LEDs embedded into an adjacent glass panel. At each stop inside the brain, visitors can use the joystick to select key structures and learn more about them on the console display.

To maintain a smooth educational experience and to achieve the highest medical accuracy, Intervoke worked with specialized neurologists from Kenhub to engineer and program this fully interactive brain exhibit application using C# and the Unity3D platform. It was necessary for the team to utilize advanced procedural programming workflows to make sure complex cellular processes are displayed accurately. This also includes 3D digital sculpting and painting all brain assets in Zbrush, and the creation of all animations using Maya for the final export to our custom software application.

Battle MS was made to provide a stimulating way for the user to learn and experience the MOA (method of action) of the disease multiple sclerosis on a cellular level. It is an educational VR game focused on using nanites to fight this disease from inside of the body. This game takes place in the future and depicts a scientist that engineers a nanite “a nanoscopic probe” in her lab, which is then injected into her bloodstream in order to treat herself from the debilitating autoimmune disease of MS.

This nanovader connects directly to her VR headset in the game. Once the scientist injects herself with the nanovader, she can see what the nanite views inside of her body through the VR headset. These nanites can travel through the bloodstream into the brain, breaching the blood-brain barrier, then entering the brain to protect neurons from the autoimmune response of the t-cells attacking the myelin sheath around the axons. Adding in other potential details like the final cure of “immune stem cell treatment” that would be the ultimate cure of the disease.

She created this treatment with a retro look and feel to make the remedy gameplay simple and effective because she knows that over time she is losing concentration and problem-solving skills due to the effects of the disease.

There are a lot of really cool educational brain visuals, such as neurons and t-cells, and sound effects, with the game progressing in more difficult levels as the player wins.